The Morel kit is unique among the products we feature here at Everything Mushrooms, in that it is an experimental product for more advanced cultivators.

Most species in the genus Morchella are what are known as mycorrhizal species, meaning that they require the interaction of a host tree to provide them with the sugars they use to produce mushrooms. This is the reason that Morels, along with Chanterelles, Boletes, Truffles, and other tasty wild edible species are so resistant to artificial cultivation.

Morchella importuna, or the Black Landscape Morel, that we offer is one of a handful of exceptions to this rule in the genus, in that it is at least partially saprophytic, meaning, like oyster mushrooms or shiitakes, that it breaks down organic matter on its own for nutrition without the help of a host tree. In a paper by Kuo, et al (2012) they explain the importuna “epithet means “assertive” or “inconsiderate” in character; the species often is the cause of consternation and distress among gardeners and homeowners whose territory has been invaded”. They go onto explain M. importuna shows up unexpectedly in landscaped areas, planters, gardens and wood chip beds. [1]

There are currently thousands of acres of Morchella importuna and a handful of other saprophytic morels under cultivation in East Asia, producing nearly 500 tons of fresh morels per year. [2] So, while the process may be a little more complex than that of other species and the results are much less predictable, with a bit of experimentation and attention to detail there is certainly the potential for a huge payoff in your mushroom garden.

Through careful study of the species’ life cycle, a few crucial, if poorly understood, steps were developed to initiate the outdoor fruiting of planted morel spawn.

The first being the encouragement of a “powdery mildew” stage of growth, in which the spawn colonizes a nutrient-poor soil medium and produces a bloom of white conidia on the surface. The ascospores from this conidia stage then germinate to form sclerotia, a hardened mass of mycelium which acts as a resting stage over winter.

The second important step is the introduction, and then removal, of an exogenous source of nutrition. This is done by laying bags of uncolonized substrate on top of the colonized beds and allowing the mycelium to grow up into them. After a number of weeks, the substrate bags are removed and composted. The exact function of this process is not known, but it does seem to be a necessary step to initiate fruiting.

The third and final step is, in the early weeks of spring, a gentle flooding of the morel bed using drip or micro-spray irrigation. This stimulates the morels to feed on beneficial bacteria that are essential for fruiting. [3]

Throughout the growth cycle, it is important to protect the bed from direct sunlight and maintain proper temperature, moisture and humidity levels throughout the growing season. This is most easily done with a shade cloth canopy overhead, and through the laying of biodegradable agricultural film mulch atop the bed, which can be found at most garden stores.

There is certainly a lot to learn about the process, and through trial and error, experimentation and attention to detail, the science and art of Morel cultivation will inevitably become more accessible and predictable to the average gardener. So: experiment, make mistakes, take notes, and let us know what you learn. Good Luck!

Your bed should be 2-4’ wide, and 5-10’ long. Morels like loose soil, so till the garden bed, adding topsoil to a height of 6”. A trench of at least 1’ wide should be kept between parallel beds. Remove rocks and other debris from the soil before spawning. It is also very important that the bed drains well, so do not put it in a low spot that will gather water.

Spawning should take place between October and December, whenever the highest local temperature does not exceed 70°. Break up and cast spawn thinly and evenly across the surface of the bed. Then cover with 2” of topsoil. Water the bed to a moisture content of 50-70%. Agricultural mulch film is then laid over the bed, and a canopy of shade cloth is put up to protect the bed from direct sun. Monitor soil moisture content and maintain at least 50% throughout colonization.

After 10-15 days the soil should be covered with white, powdery mildew. This is the conidia stage of the morel mycelium. Take your 5 lb exogenous nutrition bags, and cut a slash in one side of the plastic. Place these bags on the bed, cut side down, 2’ apart from one another. Cover again with mulch film.

After two months, the morel mycelium will have fully colonized and depleted the nutrition bags. They can then be removed and composted. Cover again with mulch film.

When the temperature increases to 45° in the spring, the mulch film should be removed and the bed should be flooded slowly, using drip or micro-spray irrigation, to maintain an air humidity level of 85-90% and soil moisture level of 65-70%. The bed should be protected from direct sunlight with shade cloth or tree cover throughout its life cycle. Harvest when mushrooms are 10-15cm.

*How To Make Exogenous Nutrition Bags

There are a great many substrates that can be used for exogenous nutrition including wheat or rye grain, chaff, bran, sawdust, sugarcane bagasse, corn silage, cottonseed or soybean hulls, etc. A commonly used recipe is grain 67%, sawdust 28%, and lime 5%. [4] However, the makeup of the exogenous nutrition bags is not strict. These should be hydrated to 75% water content, loaded to 5lbs and sterilized at 17psi for two hrs. 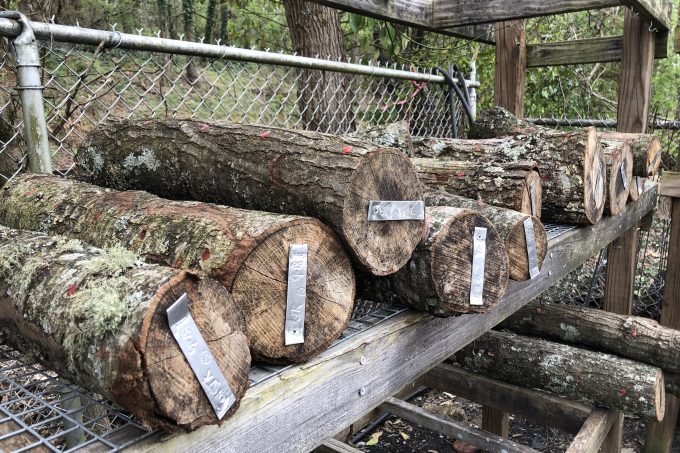 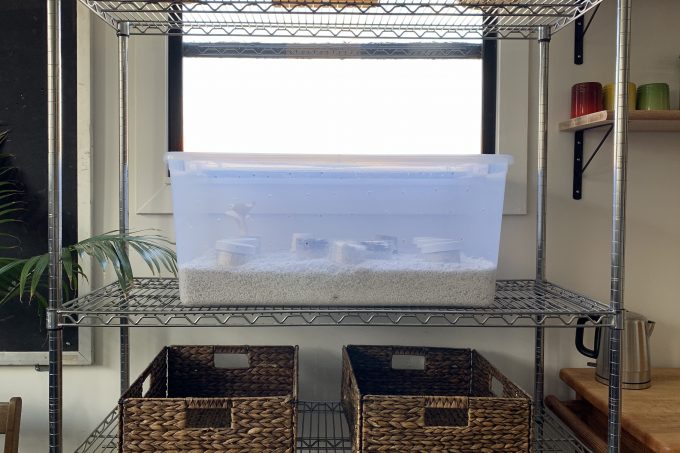