Eggplant and Elm Oysters: Made in the Partial Shade

Eggplant and Elm Oysters: Made in the Partial Shade

The
benefits of growing mushrooms in your garden go much deeper that you
might first realize. Not only will you be growing two food crops in
the same space, but they have synergistic and beneficial effects on
one another. Physically,the straw and woodchips used to grow the
mushrooms act as mulch layer that keeps you plants moist and weeds in
check. In return, plants provide shade and transpiration from the
leaves has a cooling effect that keeps the mushroom mycelium happy.
Nutritionally, the plant roots provide the mycelium with sugars, and
the mycelium provides the roots with water and minerals in a
bio-available form as they break down the mulch and the soil. For pest and disease control, some fungi like the Elm Oyster are actually
entomopathogenic. That is, they kill and sometime “eat” some of
the bugs your plants attract. Mushroom mycelium can also keep fungal
and bacterial invaders in check. By companion planting, you get to
play Mother Nature by creating a mini-ecosystem in your garden beds.

I
have grown elm oysters in garden beds with peppers and kale. Both did
OK but the plants didn’t provide the shade necessary, and it wasn’t the right time to grow many Elm Oyster mushrooms here in Tennessee. When thinking
about what might work better, I was struck by a memory of visiting a
friend’s house.  I stuck my nose into their business by telling them
that they had planted their eggplant in a spot that was too shady.   As the summer went on, I was pleasantly surprised to find out I was
wrong. Not only did the eggplant grow but it had significantly less
flea beetle damage than many eggplants have in full sun.  Although it did not
produce many eggplants; the flowers and foliage were lovely enough
to call it an ornamental.

So
I thought I would try to grow eggplant both
white and western, with elm oyster mushrooms in
partial shade. It was the best combination I have tried so far.
There was a large crop of eggplants and the damage from insects was
minimal. In addition there were two flushes of elm oysters, one
early in the summer and then one later.

Start
by choosing the garden location. The best spot for both crops
here in Tennessee is partial shade. Farther north the large leaves
of the eggplant and cooler temps would probably allow for a mostly
sunny spot. One Everything Mushroom Sawdust Spawn Block of Elm
Oyster will cover 20 to 40 Square feet of bed. So choose a site
that can accommodate a bed somewhere in the 3×7 to 4x10ft range.

Prepare
the bed: It is necessary to
start with rich, well-drained soil. Mycelium will be burned with any
kind of inorganic fertilizer so stick with organic. Amend the
soil with well-composted plant materials or aged manure. Avoid
fresher amendments like leaf litter that are bound to have native
fungi lurking which slow down or take over the Elm Oysters.

Insure
soil is well-drained, as standing water will damage or even kill the
mycelium. If needed, till and amend with inorganic materials for
drainage (like vermiculite).

Soil
is a whole science, if you are new to organic gardening in your area
look for suggestions from local gardeners and extension agents.

Plant
the eggplant early in the spring: Here in East Tennessee, I try
to start plants soon after the last frost. The last frost date
here is Mid-May, to which I pay no attention, because it can get hot
quickly here and I want plants and mushrooms started before it gets
too hot. Keep an eye on the long term forecast, and if there is no
frost go ahead and plant. I start my plants in late April with the
understanding there is a small chance you may need to cover plants if there
is a frost warning.

Start
your mushrooms: Once plants are established and starting to grow
(2 to 3 weeks later) its time to spawn. Give your mushrooms a good
head start against possible invaders by putting down a layer of
cardboard or burlap sacks. 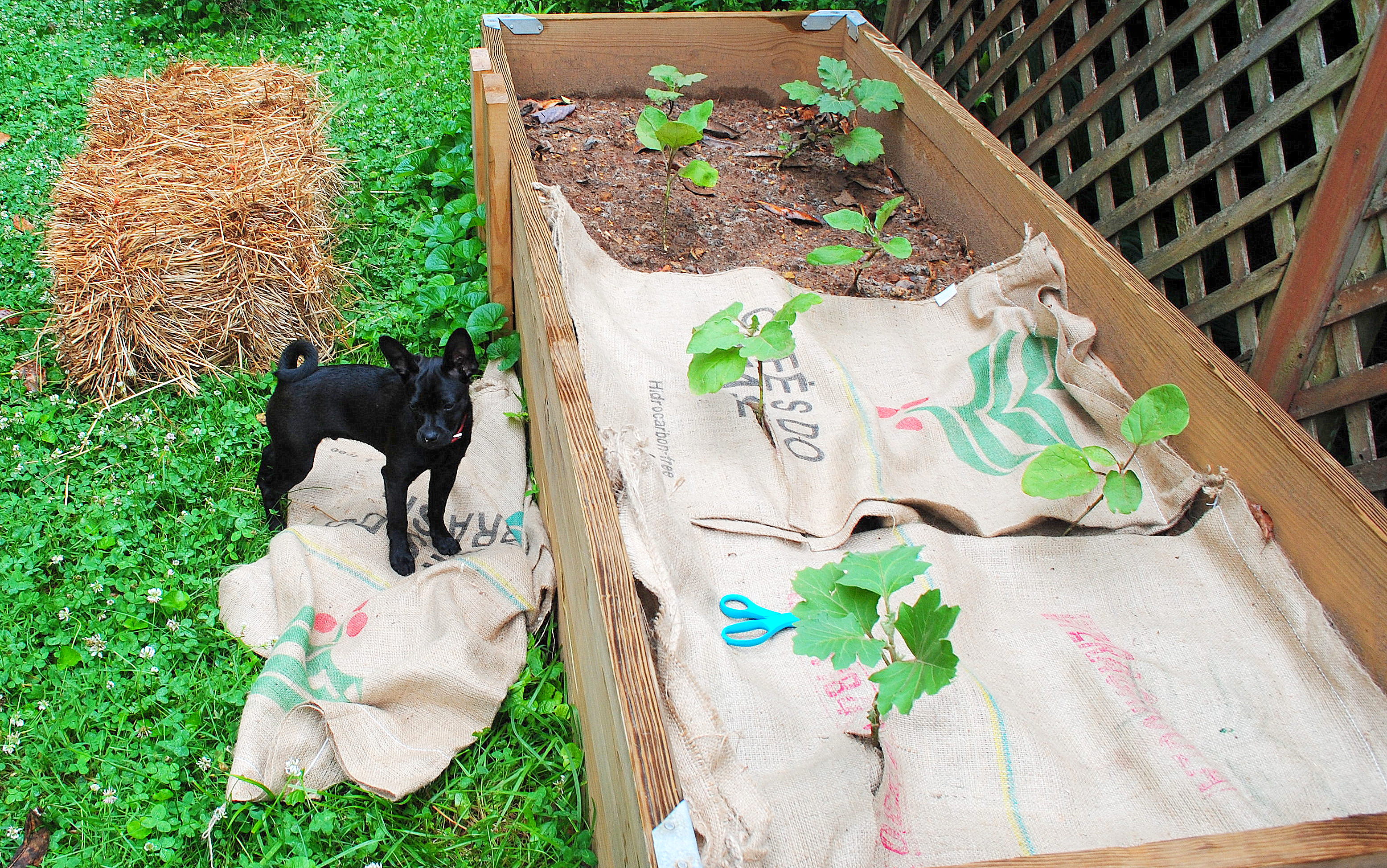 Always
start with fresh dry substrates (straw and wood-chips) with no hits
of fungal or other growth. Put down a layer of loose straw, break up the spawn block into golf ball to tennis ball sized pieces and broadcast
over the straw. 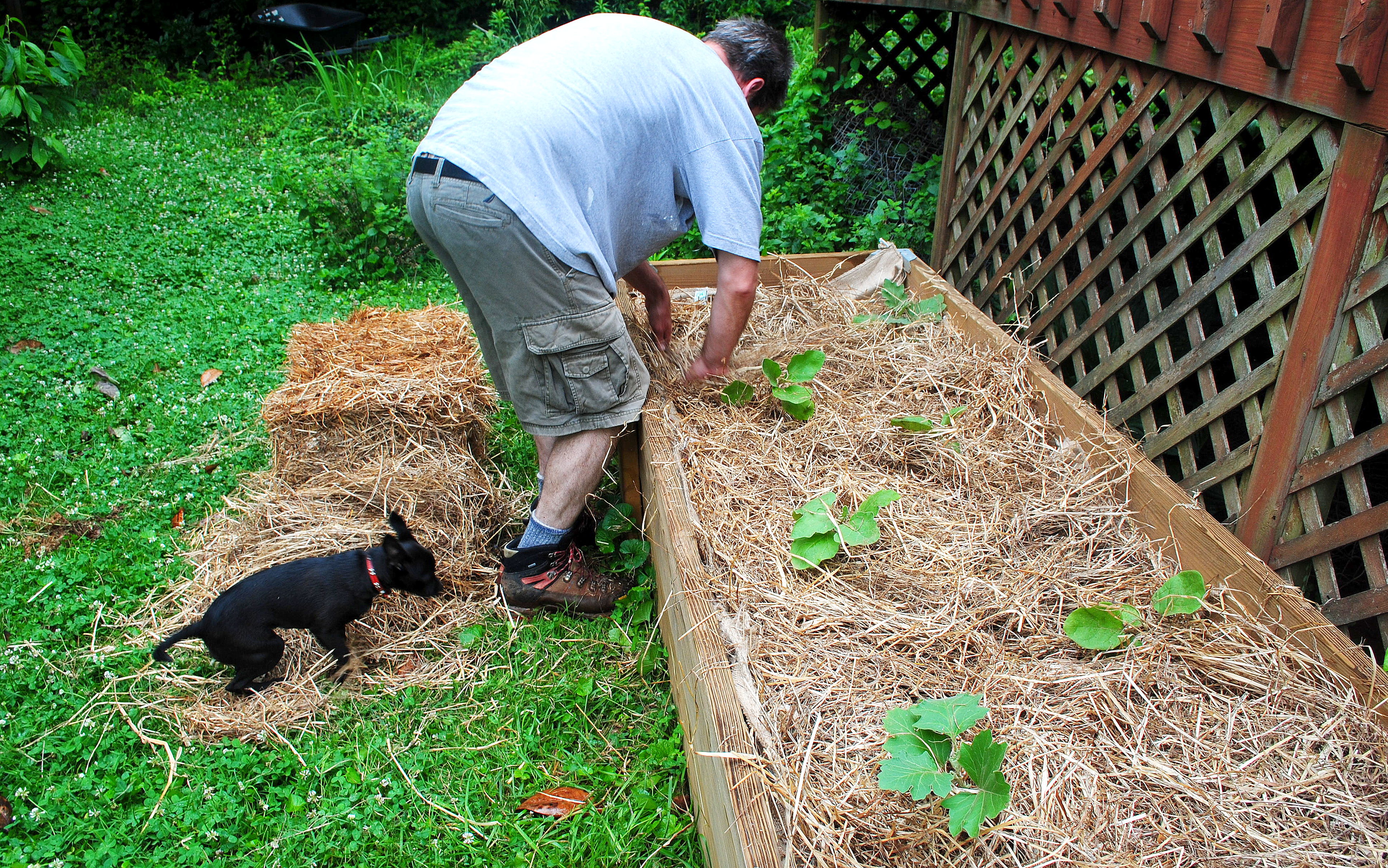 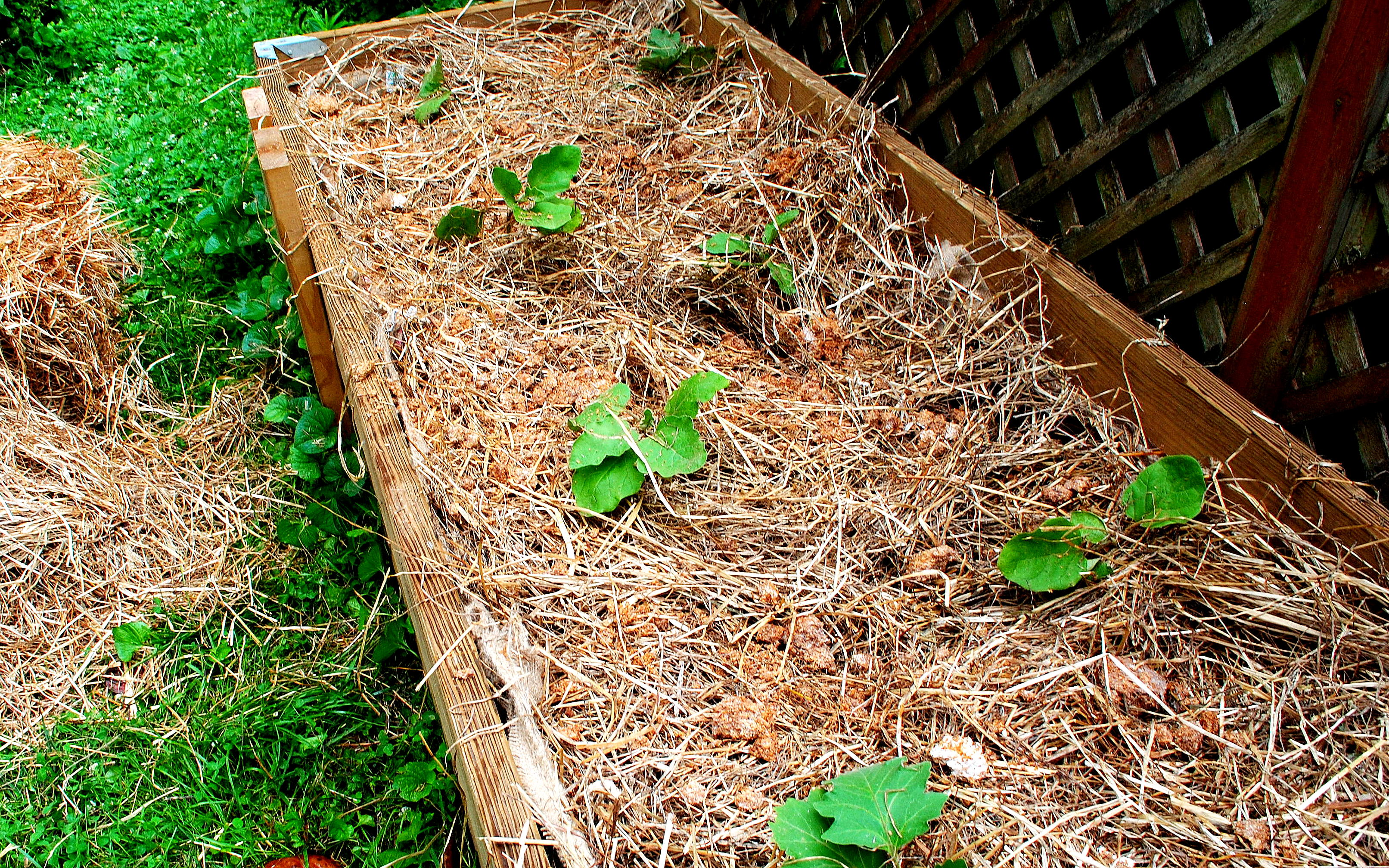 Add more straw and top and finish with a layer of
wood-chips. 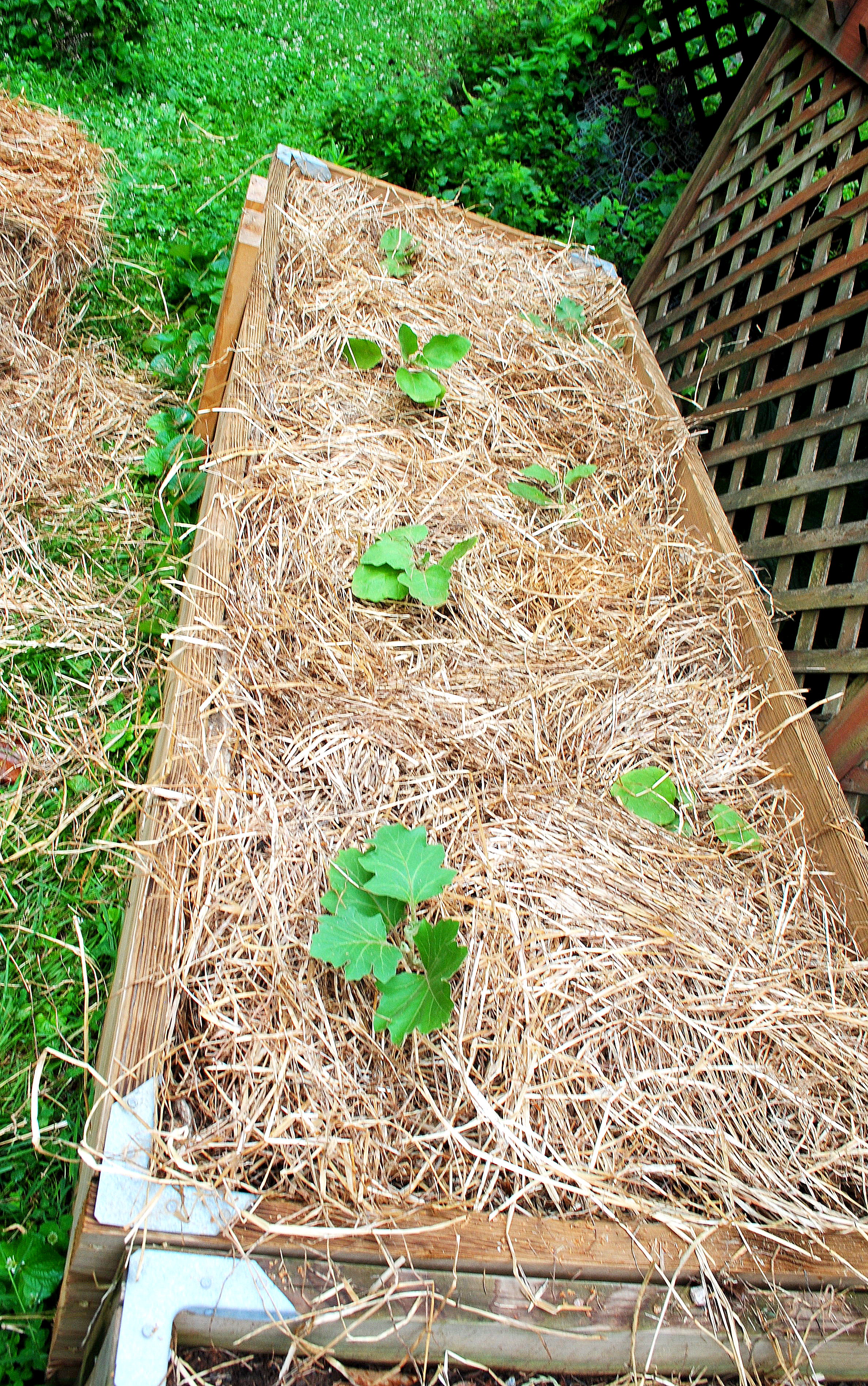 Now the bed is ready for watering!

Press everything together so that the spawn is making
good contact with the straw substrate (this probably needs to be done
several times). The layer of heavy wood-chips helps keep everything
compacted.

Water:
Water like you would a normal
vegetable garden. In general, give
the bed a good soaking every two to three days if there isn’t a good
rain in the mean time. If it gets very dry or wet increase or
decrease watering accordingly.

Vigilance:
Check beds daily for
mushrooms, especially after big rain events accompanied by
fluctuations in temperature. The mushrooms don’t last long outside.
They also have the tendency to flush while you are on vacation and
you want good pictures for your blog. 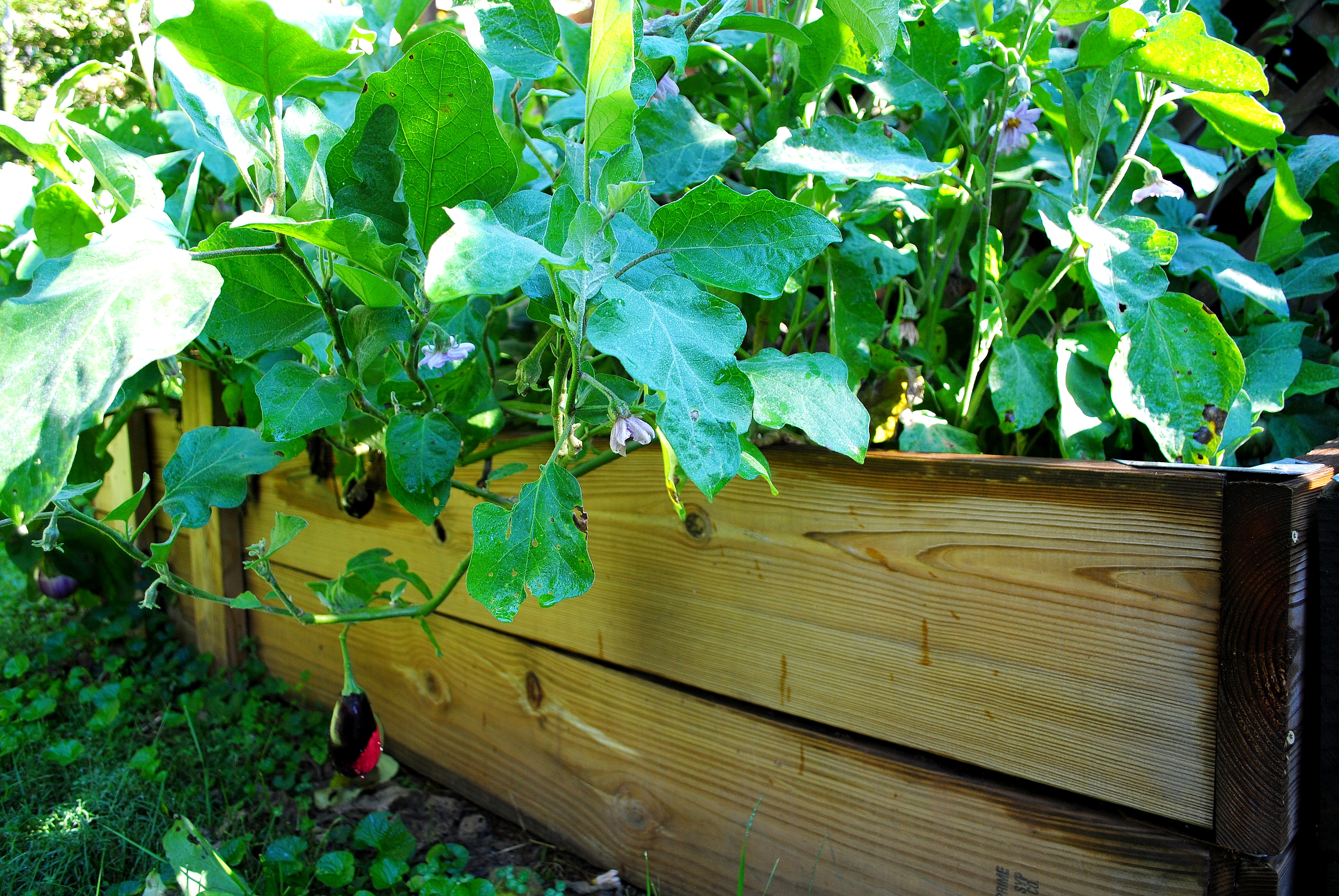 Growing
specialty mushrooms, especially outdoors in beds, is a new to most
gardeners here in the US. There is very little formal research and
almost no funding to look into new methods. The thing is mushrooms
can surprise you. Mushrooms can grow in a host of conditions and a
wide of range of temperatures. Who knows what will grow best in
your area.

From
my backyard experiments, I think the entomopathogenic aspect is
particularly exciting and much more widespread than reported. A
formal study of Elm oyster showed that mycelium could kill 62% sugar
beet nematodes in laboratory on petri plates (Palizi,
Goltapeh et al. 2009). The same study confirmed that Pleurotus
oyster mushrooms are able to capture, kill and digest the same cyst
nematodes. Both species kill the bugs by excreting toxins from their
hyphae. While studies like these are exciting the ability of
mushroom species to fend off or kill bugs has not been well explored
or employed in the garden setting.

Sometimes
even question dogma when it comes to growing plants.

I
did a pretty extensive internet search for growing eggplants in the
shade and all experts seem to agree that “eggplants are a full sun
crop”. They have large leaves like many shade dwelling plants. I
hypothesized that here in Tennessee where it gets so hot, perhaps the
shade provides enough of a a cooler spot that allow eggplants to grow
better.

When
things work it can be great fun. I was delighted my mental
meanderings found a great partnership between Elm
oyster – Eggplants in semi-shade. The large leaves and creeping
nature of the eggplants produce enough shade to keep the mushrooms
happy. Not only did it provide a couple of flushes of delicious Elm
Oyster, but my eggplants never looked better or produced more fruits! Something else with large leaves like squash might work even better
as well.

I did the oyster-eggplant bed near a
control plot with no mushrooms, but mulched with straw and
wood-chips. The difference in bug damage was huge! 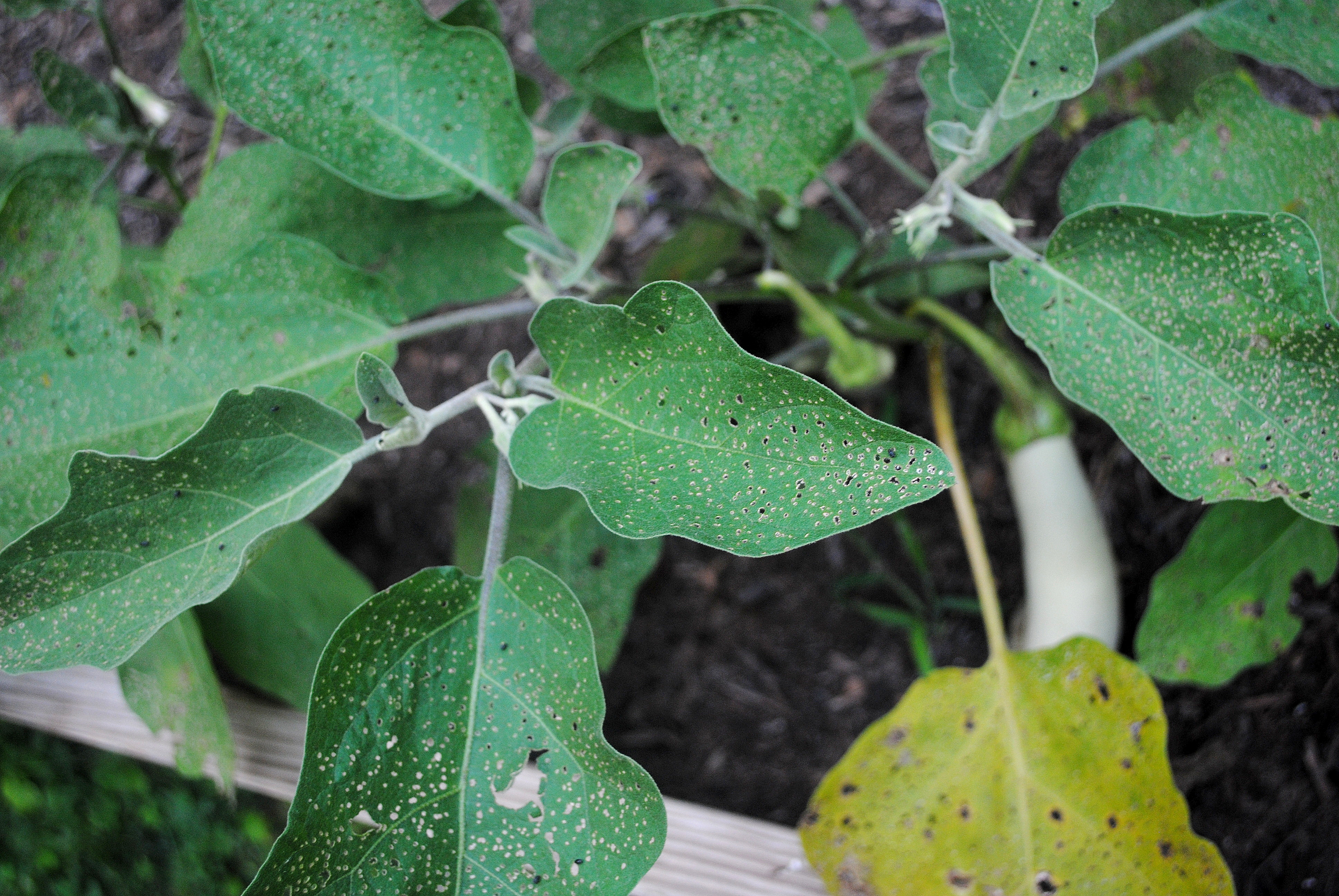 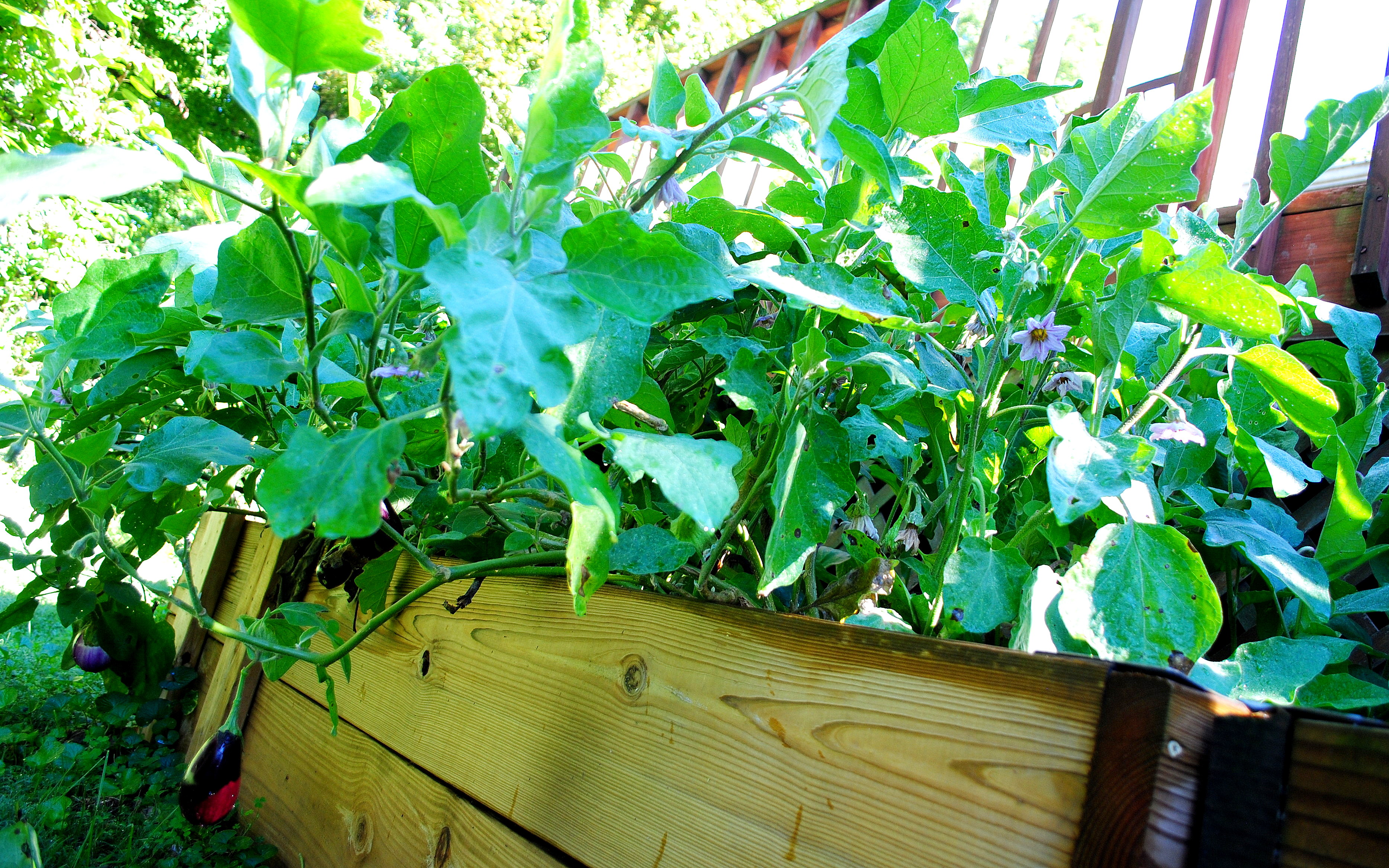